Google has launched its new Short Video Making App Google Tangi. Currently, Google Tangi has been launched only on the web and iOS platforms. At the same time, it allows sharing how-to videos of the creative type. Unlike TikTok, people can learn new things through Tangi.
Do you know what is Google Tangi App? The recently released “Tangi App” has attracted all technical experts to itself. To give a tough fight to Tiktok, Google has launched its new short-video making app and named it Tangi. Tangi is mainly made to focus on Creativity among people. It encourages people to make (DIY) videos along with creativity.

Talking about the Tangi app, this is a product of Google’s in-house incubator titled Area 120. The company launched Tangi in the initial phase itself on the web and iOS platforms. It mainly allows people to share creative-type how-to videos. Unlike TikTok, Tangi’s main objective is for people to learn new things. Hopefully, you will get full information about Tangi to read in this post. Then let’s start. 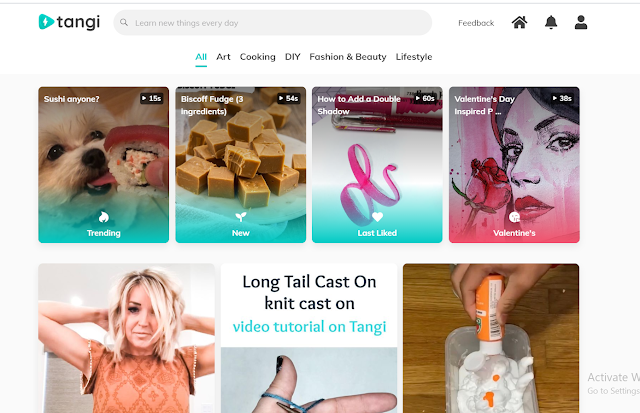 What is Google Tangi

Google Tangi is an app in which users can create 60-second DIY videos. These videos are mainly learnable that help people to learn and know new things. These DIY (DO-It-Yourself) videos include many categories just like art, crafts, cooking, fashion, beauty, lifestyle, etc.

Also read – What is a processor and how does it work?

Finally, a tech giant like Google has also managed to add its app to this short video making apps. Tangi is actually developed by Google’s branch Area 120, which is actually Google’s in-house lab to develop experimental projects. This project “Tangi” has been developed for the last one year.

What is the main purpose of creating Google Tangi?

The main purpose behind creating “Tangi”, a social video sharing app created by Google, is that it is designed to help people learn new things. In this, they can connect with many such vibrant communities that are centered according to their hobbies and passions. In simple language then, it is actually an extension of TikTok’s short-video format and Instagram’s community features.
read – What is ROM and how does it work?

1. First of all, you have to go to https://tangi.co/ website.
2. Once you reach the website, you will see the profile icon in the top corner, you will have to click on it.

3. Now you have to click on Sign in with Google. After doing this, you will now see all your Gmail IDs in front of you, in such a way, you have to select the Gmail ID from which you want to create an account. This is how you can create your Tangi Account.

How to Edit Tangi Profile?

Once you have created your account on your Tangi App, then you have to edit your profile first after creating an account. To edit a profile, click on the icon of the profile and then click on edit. At the same time, you will be asked to complete a lot of options.

How to Google Tangi Join?

Do you want to join Tangi too? If yes then in this way, after creating a Tangi account and after completing your profile completely, now it comes to know how to join Tangi {How to join Tangi}. To do this, you have to follow the steps given below.

1. First of all, you have to click on your profile.

2. Now you will see APPLY NOW button at the bottom and you have to click on it.

3. After doing this, a forum will open in which you have to fill all the information dealt with.

4. Once you have filled all the things, then you have to click on the Submit button below.

By doing this, an email will come to you from Google within a few days. After the confirmation email arrives, you can now create and upload a 60-second video. Right now only in iOS and web platforms, you will get to download Tangi App.

Which platform is Tangi available on?

Tangi is currently in the Development Stage and not open for all users. Currently, this app is available for free download on Apple’s App Store and web. It is accessible in every aspect of the world except the European Union and is not currently available on the Android Platform.

Click here to use Google Tangi APP on the computer or laptop https://tangi.co

Tangi’s ‘upload’ features have been restricted to only a few users for the time being. Similarly, if you are a creator and want to join it, then you will have to apply to be a part of this video platform.
read – What to do if you lose your mobile phone?
What is SMPS and how does it work?
What is Image stabilization and how does it work?

I hope you have liked this article about what is Google Tangi. It has always been my endeavor to provide full and complete information about it to you. So that you do not have to search more about this anywhere else.


This will likewise spare their time and will get all the data in a single spot. If you have any questions about this article or you need any help you can tell us. You ought to be some improvement in it, at that point you can record remarks.
Did you liked this post about Tangi App and TikTok or not? You got to learn something from this post, then share this post. You can share this on social networks such as Facebook, Twitter other social media sites.
3.3/5 - (3 votes)